During the last couple of years Syndicate have produced a series of advertising campaigns for Parks & Resorts. First assignment was this  campaign for “Snake” a ride that was brought in as a “fillout atraction” during a park reconstruction at Gröna Lund during the summer of 2019. a film inspired by Steven Spielbergs early years. The concept: “Snake comes to Gröna Lund” where you could replace the word snake with jaws and that should picture the idea.

First out was the teaser, a short clip introducing the character. It was very well received in socialmedia, harvested clicks, likes and shares in exceptional numbers. Apparently peoples urge to trigger their friends snakeophobia is way stronger than we ever anticipated. 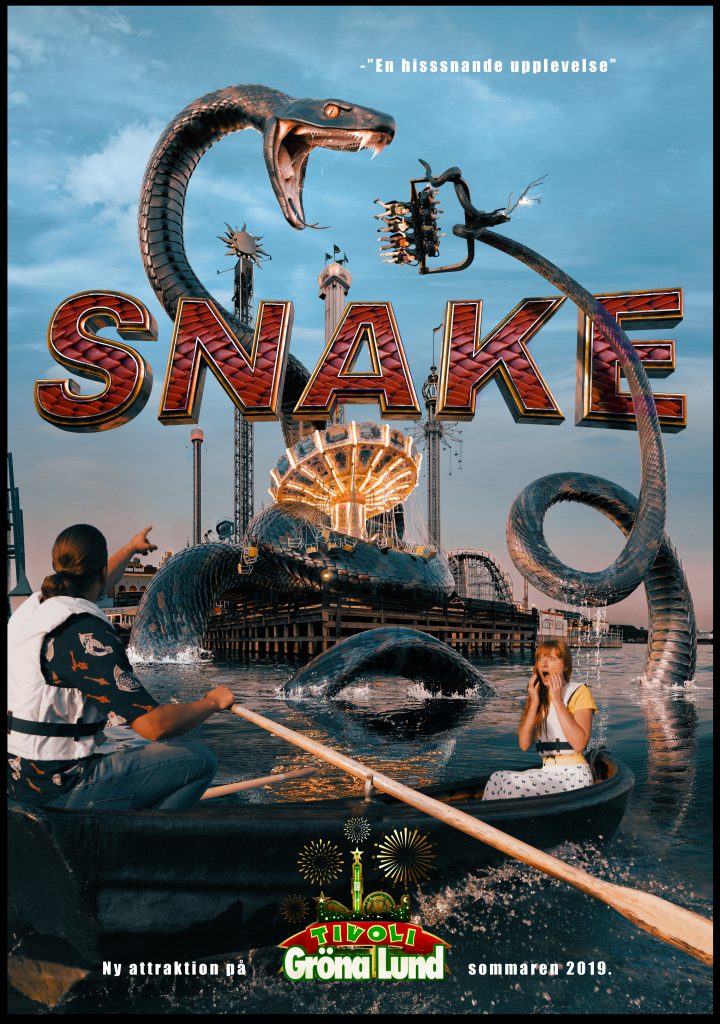 As the the film had to be produced far before the actual snake ride was installed, there were not many options available except to rely on CGI for the main character of the film.  An approach that showed to work really well. As the commercial, even more so than the teaser received unprecedented click rates. According to the media planner 3 out of 10 people who saw the film on facebook shared it to one or more of their friends, which is a like-ability rate unheard of for similar campaigns.

The Snake print was made for billboards and public transportation around town. The composite imagery was made in layers for easy adaption to all kinds of formats, from vertical billboards to widescreen banners. Above is the pre-production sketch drawings for the print artwork.  The print involed both monstro 8k greenscreen footage of the couple in the boat, a stiched ultra high resolution plate of the old carousel out on the dock and some elaborate high resolution CG renders with the snake to tie it all together.

Some raw frames and insperational footage from pre-production.

Pre-production animatic and shot footage without VFX and the final film.

Below is the pre production animatic.  To the right is the side by side, with &  without VFX.

Gröna Lund - Snake Before & After VFX

When the construction at the park was done, and since the SNAKE campaign was such huge marketing success Parks & Resorts decided that Snake would continue its success at their other facility, Skara Sommarland, a water-park located on the west coast of Sweden. Then the idea of a road movie where Snake leaves Gröna Lund and makes her way over to set up a shop in Skara started to grow. Click on the banner below and read more about it.